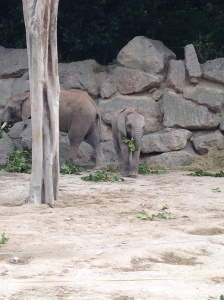 The Lone Elephant
By Veronica Nkwocha

A certain family of Elephants were on a long journey across vast plains, deserts in search of water. The journey would take them weeks upon weeks.

The Matriarch was strong, she was wise and above all, she had the fire of ten thousand men. She led them, walking alone. Apart and slightly ahead, a lone powerful beacon; through the hills she triumphed, through the valleys, she inspired. And the elephants all followed her. They were tired, they were growing weaker by the day but they had the fire of mama’s leading to urge them on. To the hope of water for everyone, to life.

As the sun set one terrible day, a lion found them. It sniffed for the weakest and trailed the broken. Those who had undergone the journey over the years had the experience to carry on; they were at the fore of the journey, right behind the Matriarch, each one eager for the oasis that was nearly within sight. They could smell it in the air, and most importantly, they saw their old faded footprints from a distant past to show them the way.

At the far end limping along though, were the calves. They tried with all their waning strength to keep up with the herd but their small legs betrayed them.

The lion was getting closer and closer. It gnawed at the heels of the last of them all, a lone yearling, the smallest calf, drawing blood. She limped along frightened and yelping in pain.

Then something strange happened. The stronger, older and wiser elephants surrounded their lone kin to protect her from the lion.

They bellowed and trumpeted, they stomped running around wildly, their large frames covered in a canopy of dust wafting from their terrible anger at the prowling lion.

They formed a bulwark against the rampaging hunter and provided a secure refuge for…
their lone beacon, the Matriarch,
closing their ears to the bitter cry of the lone yearling even as the lion took her away,
the smallest of them all.