So I found something I wrote ages ago (late 80s) and I was gobsmacked at my…handwriting! It was clear, precise and pleasing to the eye if I may say so. If you were born in Nigeria in the tumultuous years of the Civil War and in the early 70s, I would say, the piece should resonate. There is a lot of generalisation (please pardon me, confused teen/fresh uni student/jambite) and a great deal of it is written from my own childhood (hangs head and hides).

Where there are tales about content children, it would not apply to everyone and I apologise for writing in a hurry and never getting back to re-writing and editing it. I reproduce it here, flaws and all just so you get a feel of one perspective in the Nigerian tale. It is a fragment (albeit a real one) of the picture of the journey of Nigeria. 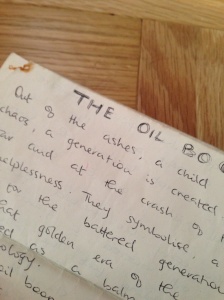 Out of the ashes, a child is born. From out of anarchy, of chaos, a generation is created. Spewed forth in the heights of war and at the crash of the reign of turmoil, fear and helplessness, they symbolise a pause from the ache, a hope for the battered generation.

In that golden era of the post war days when the oil boom served as a balm to healing wounds, the light of the future gleamed, bright. The tottering giant towered, its granary was full and in the bowels of its earth, the oil lay, thick and murky; the black gold. Nigeria was on the rungs of ladder of success, at the brink of self-actualisation. The climb, it knew, would be fast paced but sure; its way greased with the very oil that was its bargaining power.

The early 70s was a period most Nigerians remember today with nostalgia. A period where small towns grew to large cities. The movement from rural settings to the urban, mono-directional. The need for manpower for the ever growing industrialisation was unparalleled with the number of skilled workers. A lot of emphasis was placed on education. Primary, post primary and tertiary institutions grew in number to accommodate this need. Well-equipped hospitals were available and accessible. The standard of living was high, food, clothing and basic amenities were cheap. The growth of infrastructure was dynamic and the network of roads, a kaleidoscope of high technology.

The oil boom kids were born into homes where material needs were not lacking. There were enough toys to play with, plenty of food to warm their tiny bellies and in school, the quality of education was standard. Teaching aids were readily available. Most school children had good uniforms and most importantly, they wore shoes.

Time moved on and the generation grew, unaware of the intricacies that were a part of its life. The intricacies; the mind of corrupt leaders who uncaring of the after effects, fell victim of the ‘chop’ syndrome.

The late 1979 and the early 80s marked the era of Democracy, where Nigeria still towered, a giant but with the beginnings of crumbling feet. The politicians, as though filled with an innate undying hunger, mismanaged grossly the floundering economy, enacted short sighted economic policies and were masterminds at creating and awarding invisible contracts.

The children now on the verge of becoming full-fledged adults were spectators in a complicated game of chess, powerless to move the pawns that would determine their future. At the close of the day, the Prize is to be laid at their feet, their responsibility? How to carry on.

The glut in oil prices in the international scene coupled with the purposelessness of an inadequate administration saw Nigeria into an era of confusion. It was all a beginning, the worst was yet to come.

Through all this, the oil boom kid is growing. While in the tertiary institution which is his right which he realises he’s lucky to get considering that the generation yet to come might not, he hears stories. Of how the amenities he cannot but imagine, were available. Three square meals provided by the school, a standard library bulging with information from all over the world, where the dynamism of fresh discoveries require for one to keep up to date, clean modern facilities, enough chairs in the lecture halls and a job right after. His dream of being a part of what was while he was growing trickle slowly through his fingers. He is not alone.

The picture at the very end of the tunnel sighted in the oil boom days might have been otherwise blurred. How else can one justify the existence of two very different pictures? The playgrounds where these very kids played are now in ruins. The tiny little children hurrying off to school in the mornings have no school buses. They run along on bare feet and tattered uniforms some of them on a breakfast of watery pap. They will not be punished for being unkempt when they get to school, no, they are a product of the society, a mirror of the society. In their classrooms, the baby voices singing ‘baa baa black sheep…’ might not be sitting on chairs, might not be reading from books because they have none.

Meanwhile the oil boom kids have grown. They are the oil doom youths. Victims of a low quality education where the undergraduate need not ask what ‘001’ means; victims of a corrupt group. Nothing is more painful than the loss of a dream. They watch as those they trusted the most turn to mere children as they clutch at straws in their bid to stem the tide, powerless as a gloomy future flows unheeded carrying in its wake, the oil doom.

The giant, a mother, is breeding in her children, an anger, a fear. The towering mountain of ear-aching debts weigh heavily on their shoulders. For how long can they stoop? They are but children in an old man’s body with none of the proverbial wisdom that comes with age. The oil doom youth is restless. He is like a jungle animal on the verge of extinction, his every instinct scream, survival.